How can we help you today?

The two exhalation valves on the Urban Air Mask 2.0 are designed to act as a ventilation system. When the user exhales, the valves help remove warm, moist and carbon dioxide filled air to otherwise build up inside the mask. When exhaling, the blue silicone disk on the filter opens like in the picture below, allowing exhaled air to be ventilated out of the space between the face and the mask. 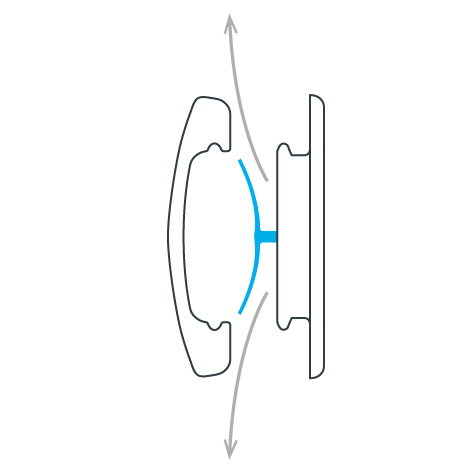 When inhaling, the blue silicone disk is completely closed, blocking any airflow through the valve holes. Hence, the idea of the exhalation valves is to increase the overall comfort of wearing the mask. However, during the time of the outbreak, when people are wearing our Urban Air Mask 2.0 not only to protect themselves but also to protect people around them, questions regarding the effect of the valves have popped up. Wearing a mask is effective not only for yourself but also for others around you. Masks with exhalation valves are much better than not wearing a mask for the following reasons:

Firstly, we want to address that when you use the Urban Air Mask 2.0, all air that you exhale is not ventilated out of the exhalation valve, a large majority of the air will still go through the filter, hence being purified. It will also hinder droplets to be airborne and spread in the air. Because of this, it will be a large difference wearing a mask with a valve compared to not wearing a mask at all.

Secondly, our exhalation valves are specially designed to not spread the exhaled air out horizontally outwards, like when you are normally exhaling. The valve cap over our exhalation valves pushes the exhaled air to the sides like in the image below. This also reduces the spread of exhaled air. This is very similar logic to a surgical mask that doctors or dentist wear, which do not completely seal but just direct the airflow away from the patient.

If your main objective is not only to protect yourself, but you wear the mask to prevent spread, we recommend, if you are experiencing symptoms, or want to be 100% sure that none of your exhaled air is leaked out of the mask, that you follow the instructions and pictures below to temporarily block the exhalation valves of your mask with valve stoppers.